“Poverty is not just about lack of resources; it’s about deprivation – of social network, justice and morality. But poverty, in its worst form, is of hopelessness”

Dr. Muhammad Amjad Saqib is the founder and Executive Director of Akhuwat, the world’s largest Islamic microfinance organization. The organization has now successfully disbursed (As of March 2022) Rs.164.84 billion in interest-free loans, helping over 5.2 million families across Pakistan. Amongst other projects, Akhuwat has also launched Pakistan’s first fee free university—Akhuwat College University— which is open to talented students from across Pakistan, as admissions are based solely on merit. 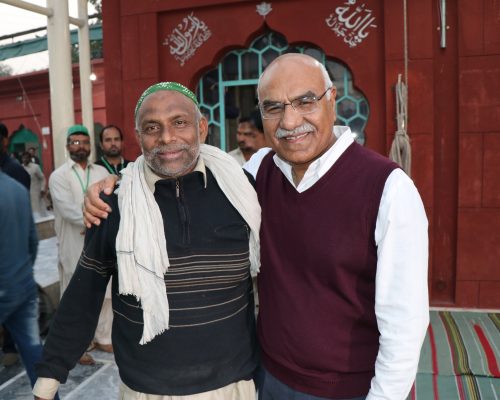 Dr. Saqib is a development practitioner, social entrepreneur, author, and former civil servant. His alma matter includes the King Edward Medical University, in Lahore, and The American University in Washington D.C. On account of his remarkable achievements in the cause of restoring human dignity to Pakistan’s most vulnerable communities, including women, persons with disabilities, and the transgender population. Through enhancing financial inclusion, education, access to healthcare, and the provision of food and clothes to these underprivileged communities, Dr. Saqib has received world-wide recognition.

Most recently, in 2018, Dr. Saqib has been the recipient of the Islamic Economy Award, awarded by the Crown Prince of Dubai and Thomson Reuters, the Commonwealth’s 31st Point of Light Award bestowed by Queen Elizabeth II, and the Social Entrepreneur of the Year award presented by the World Economic Forum (WEB) and Schwab Foundation. He has previously been the recipient of Sitar-e-Imtiaz, a coveted awarded granted by the President of Pakistan only to those individuals who have served the state to the highest degree.

Dr. Saqib has devoted his life to serving the underprivileged people of Pakistan, deriving his sense of purpose and fulfilment from his efforts to alleviate poverty. Dr. Saqib began his career in medicine, subsequently forsaking it in favor of joining Pakistan’s Civil Service. After having served at various high-level bureaucratic positions, he resigned from the Civil Services in order to dedicate his life towards creating sustainable social impact. Since then, he has supported several public and private institutions, and continues to play an instrumental role in setting-up various service delivery institutions in Pakistan. He continues to hold advisory roles for organizations and start-ups that work to promote social welfare. His most distinguished contribution is still as of yet, the establishment of Akhuwat, and his innovative approach towards poverty alleviation.

He has authored eight books, and is an acclaimed speaker who has had the honor of speaking on the topics of poverty alleviation and social entrepreneurship at world-renowned institutions such as the United Nations, Harvard University, the University of Oxford, and the University of Cambridge.

He is married to Farrukh Amjad, who he believes to be the strongest supporter of his mission. Together, they have two children whom he adores, Junaid Farid and Farazeen Amjad Shahid.

Many thanks for your kind welcome. Your “cost-cutting” methodology is very inspiring for us. I hope to visit you again soon.
Jun 4, 2019

It was a pleasure to meet Dr Muhamamd Amjad Saqib and see great work being done by Akhuwat. It is a great idea and it is being executed with a lot of care and professionalism.
July 22, 2017

I am overwhelmed. If ever I would join a philanthropic economic movement, this is the one. May Allah help you grow and serve even better
November 4, 2018

Wish you every success in the future. In the words of Dr. Akhter Hameed Khan “You are building an island and Inshallah, this would multiply and one day become a movement”.

Innovation! Is inherent in your program I wish you very success!